Intelligence, Study and Success in Chess 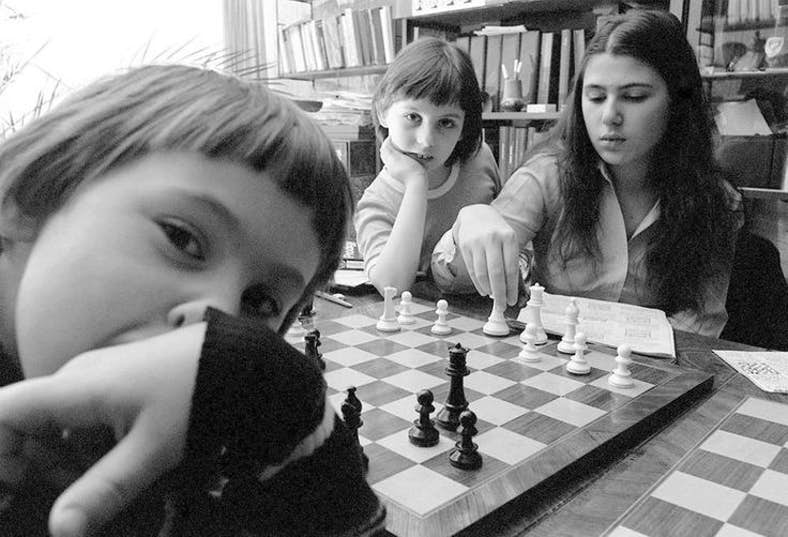 Intelligence, Study and Success in Chess

Intelligence, in its most general definition, is the power to find solutions and being able to learn; and talent is the ability to apply. Many scientists argue that these two traits are essential for success.

Hungarian educational psychologist Laszlo Polgar was not one of these scientists. He put forward the thesis that talent is not important in success, unlike the majority, and decided to start an experiment to prove this thesis. But for the experiment to begin, he had to marry. Accordingly, he put the advertisement “I’m looking for a life partner to prove my theory” in the newspaper. The Ukrainian teacher Klara, who found the announcement intriguing, accepted his proposal, ignoring people who say that they’re a mad couple for marrying for the sake of the experiment. So, the experiment started.

In 1969, their first daughter, Susan, was born while Laszlo was exploring how to make the field he had chosen, chess, fun. When Susan turned 4, she was introduced to chess and underwent special training by her father for 6 hours a day. Two more students were added to the chess class with her sisters Sofia and Judit, born in 1974 and 1976.

Result; Their first daughter, Susan, the first woman to receive the title of ” Grandmaster ”, which is the highest title of Fide, her middle brother Sofia, the person who won many important degrees by performing one of the five best performances in the world at that time, and their youngest sisters Judit are both in the general category. In the women’s category, they had their names written in gold letters in the history of chess as the only female athletes who won the title of “Grandmaster” and entered the top 8 in the world rankings.

Laszlo successfully completed his experiment by making his daughters world champions. Well, was he really right in his thesis?

The 10,000-hour rule, put forward by the University of Florida Professor Anders Ericsson, became popular with Malcolm Gladwell’s book Outliers, supports Lazio’s thesis “Cannot be born a genius, you can become one!”

The 10,000-hour rule simply states that hard work is more important than talent and intelligence to be successful. A person who works 3.5 hours a day has spent about 10,000 hours at the end of 10 years and achieves top success in that area. One of the examples mentioned in the book is the legendary world chess champion Bobby Fischer. Fischer, after learning chess at the age of 6,  said, “ The only thing I want to do is play chess ” and even devoted his time to studying chess while eating, and broke the record for the youngest grandmaster at the age of 15  (you know who broke this record later).

We can also give the example of Joshua Waitzkin, whom we know from the movie (Innocent Moves). Joshua, like Fischer, learned chess at a very young age and started to study,  and after becoming an International Master (2480 elo), he left chess and turned to Ju-Jitsu, one of the far eastern sports, and succeeded in becoming the champion as a result of his hard work! Or we can take a look at Kaan Turan from Izmir, who is considered one of the best children’s pianists in the world today and is also an amateur chess player. In an interview, he says that Tchaikovsky’s Nutcracker Ballet, which he listened to in her mother’s womb, he has never forgotten. Kaan, who met with the piano even before he was born, always prioritizes his studies to the piano, in addition to the many training he receives. When he was 13 ranked first  1st in the high school entrance exam as well as being a piano champion. (Sofia Polgar was also a famous painter besides her success in chess)

We can add names such as Beethoven, Mozart, Picasso to these examples. As it is known, Beethoven and Mozart came from  musician families and Picasso came from a family of painters. Beethoven’s father Ludwig Van was a famous pianist, Mozart’s father Leopold was a composer and musician, and Picasso’s father Blasco was a painter. They started the right education at a very young age and spent thousands of hours in their fields.

So, by this logic,  as Nobel laureate, Aziz Sancar said, “Most people believe in intelligence, I do not. It is labor that separates us from each other” can we say that if we all study chess a lot, we can become a player like Shakhriyar Mamedyarov?

Unfortunately no! No matter how much effort a person puts in, they  might not achieve “toP-level” success. Because if 80% of success is working, 20% is talent and intelligence. Even though our Aziz Hodja says I do not believe in intelligence to emphasize the importance of working, it is a scientific fact that intelligence is 50% inherited from the family and 50% shaped as a result of environmental factors. It should not be forgotten that the IQ of Bobby Fischer, which M. Gladwell cites in his work, is 187 (Einstein’s 160). However, with hard work, we can say that even if we cannot become a top player like Mamedyarov, we can become a titled chess player.

What is Important for Success in Chess?

The athlete, who loves chess and plays it willingly, enjoys learning and makes a habit of practising chess with ease.

A good education is essential for success. Good training is only possible with a good coach. The coach supports the potential of the athlete with systematic work and adjusts their training program according to the level of the athlete. The coach knows that one of the best learning methods is the athlete’s own experience, so they allow their athlete to make lots of mistakes. They then provide feedback and aim to help the athlete learn from their mistakes.

At the same time, the coach notices the deficiencies of the athlete and gives directions according to the style of the athlete. Today, unfortunately, some coaches teach their athletes the best opening they know, regardless of the game character. Although these openings bring success in the short term, they are extremely harmful to  the chess development of the athlete in the long term. For example: Stone wall-style systems played from the memory on both white and black.

From time to time, athletes get ambitious after a painful tournament defeat and promise themselves to be very good at chess. The athlete, works 6-7 hours a day for the first few days and gradually reduces these working times in the following days, and stops working after a while.

Chess is an intelligence and knowledge game that requires effort. Therefore, the more information learned, the more likely it is to win. By becoming aware of this, the athlete shouldn’t just study 7 hours a day with instant motivations and then stop working after a while, instead, they should study 1 our for 7 days, making chess a part of their life. Also; they must show the will to continue their studies even if they’re bored.

The athlete should see each exercise as a tool that will carry themself better than the previous one, and focus on the exercises in this way. They should isolate themselves from everything they will be adversely affected by providing auto-control during the practices. When they get to the board, they should only think about the game and feel the moves they make.

As Beethoven said, “Playing a wrong note is not important. Playing without passion is inexcusable! ”

The wrong attitude of families, especially in young age groups, directly affects the success of the athlete. Some families forget that chess is a joyful sport, and in a negative result, they get angry with their children as “How can you not beat an athlete with a rating 400 points lower than you ?!” Likewise, this is true for overly ambitious coaches. They should not stress their player by saying, “You will definitely win” “We worked so hard” before the game, but instead, they should make comforting statements such as “do your best, the result is not important”.

Chess is not a life and death struggle, athletes are not soldiers!